The Cost of Realibility — Out of Reach!

CIRCA – 1970, Owned an immaculate 1959 Chevy Impala. Believe I bought it (or if I have unconsciously blocked out my memory, my parents may have bought it) for $300. Low mileage, perfect condition.

And at that time, in order to finance my lifestyle, I  also worked at Franks Standard Station, in my home town,  3 nights a week and every other Sunday from 7 a.m. to 7 p.m all by my self. Premium Gas sold for $0.36 a gallon then and a customer pumping their own gas not only did not exist but was taboo.

When a customer drove  in and over the rubber hose draped across the filling station entrance the “DING DING” would sound. I would then approach the vehicle and say to them through their partially rolled down window -“Filer UP?”, and they would either reply “Yes” or “Give me X amount of dollars worth”.

In the ’70s if you had  ten bucks in your pocket you would get 10 gallons of gas, your windshield washed, oil checked and the highest octane gas for $3.99 leaving enough money left over to visit the Daisy Queen for one of their fantastic, huge double layered Hot Fudge Sunday’s in a big ass cup for  $0.40 and still have enough for a burger and fries and a soft drink later, should you be able to find a place that was open after 6 p.m.

And speaking of no longer existent services and small towns. Should  I forgot to check the oil and wash the windshield, I would get a phone call from the Owner of the gas stations within minutes of the customer leaving the service station.

This I did for a few years and a steady pay rate of $1.00 an hour. Below the minimum wage in those days, which I believe was somewhere between $1.30 and $1.48 an hour. This was because my job did not fall in category of jobs that were required to pay minimum wage.

However, this job did have its advantages for a teen with a drivers licenses and a car. My home town’s population at that time was, if my memory is working, 1040. All stores, except the bowling alley, the three pubs across the street, the Country Club and THE INFAMOUS GREEN TOP TRUCK STOP (inaccurately featured in the TV SERIES Prison Break) were the only open businesses. So except on a Friday or Saturday Night, business was slow. And Sunday’s were exceptionally boring. 12 hours of nothing to do but clean, listen to the radio and wait for something to happen.

It was also the opportune time to pull the Chevy into the garage (car wash side) and give her a good wash and cleaning or put it on the lift and change the oil and basically check out every inch of this automobile. (Note: The owner has since passed and I think the statute of limitations have passed … so it may be safe to mention that I got a lot of free oil changes working there! Enough said on that!)

Working on a car then was a breeze. If the car needed a fan belt change, a spark plug change, the timing checked or just about anything else  it was easy. The picture below is a picture of a 1959 Chevy Impala Engine. Mine was similar to this, but clean as a whistle. It was nothing to drag the High Pressure Car Wash Hose over and give it a good washing, with no effect on its ability to purr like kitten; assuming I didn’t spray water into the, now apparently out of date object called a carburetor. 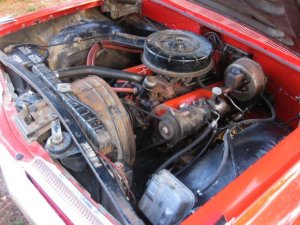 What is unique is that when you had a problem with engines, it was very easy to fix. Need spark plugs changed? Use a spark plug wrench and just do it. Need to replace spark plug wires? Reach down and take out the old ones and replace. Need some heavy duty work like changing a head gasket? Get your tools and it was simple,  if you knew what you were doing. Need to replace a fan belt? Again reach down and just do it.

Most repair and service problems were simple and usually a somewhat easy process. Only real problem I ever had with doing these type things was and still is a problem today. There was either one tool I needed that I didn’t have, or (if you can’t relate to this you’ve never tried to disassemble anything) there was always that one bolt or one screw that would not budge, regardless of whether you had the right tool, WD-40, or the strength of a thousand Sumo Wrestlers …it was not going to budge.

Having discussed the simplicity of servicing, repairing, tinkering with and souping up these engines then was pretty simple! However a car engine in the 60’s and 70’s had a lower mileage life expectancy of around 70,000 to 80,000 miles. If you didn’t have blue smoke pouring out the exhaust by then it was a great thing. If you made it to 100,000 miles and it still worked fine, you were either considered lucky and got a well-built engine, or you be were considered to be  one of those people who either really took care of your cars or one of those people who only drove their car to church on Sunday and never drove it over  25 miles an hour.

CIRCA – 2011. We now own a pre-owned 2000 Audi A4 Quattro. Purchased for $5000 in 2009. It had a few dings on the body, Interior was one step below immaculate (couple of tears and spots but otherwise immaculate). And it had 128,000 miles on it. Thinking back to the 1970’s where it was considered taboo and bad luck to buy “any” used care with 50,000 miles on the odometer. Mentality I hesitated in purchasing it because of mileage. But knowing the technological advances since the 70’s, resulted in cars lasting longer then ever before, I decided to risk it.

We have had the car for 3 years now. It, when working, is a great ride, with all the technological amenities. However, when you have a problem with anything in the power train …. IT AIN’T a ’59 Chevy Impala.

It is comprised of a computerized operation and monitoring system, consisting of what seems like more sensors than the space shuttle, and an engine compartment that makes it impossible to recognize anything under the hood.

Additionally the German Manufacture, tries to aid this consumer in the best way  possible with stickers and molded labels all over the place explaining cautions, warnings and procedures – IN GERMAN!

This computer system is great for telling you everything that goes wrong in this Vehicle. In fact I believe it to the predecessor to HAL, the 2001 Space Odyssey Computer. And Like HAL when the Computer system gets it wrong, it assumes no responsibility and continues making the assumption that it is perfect and any malfunction is every other systems fault and all other systems blame other systems  and all recommend repairing or replacing each other.

However there is help available to the consumer for these situations. The wonderful computerized system will inform you of all found malfunctions (real or assumed) via an electronic display on the dashboard. However, this display never worked on this car and it looks like a small Cell Phone LED Screen with only every 5th pixel lighted. And the system, being perfect in its own Megabyte Processor Mind, doesn’t recognize this as a problem … Thus the Beginning of HAL’s Problem.

So we are left with either taking it to an Audi experienced and certified Audi dealer so they can plug in their computerized analysis machine and find out what the problem is. However it tends to cost from $50 to $100 a pop to have this done. The alternative is to by a program for your laptop computer that will do the same thing.  Price – $120 – $150 (Cables and Connectors not included).

Audi, and other manufactures have this thing going (my assumption). Build reliable cars, place rigid rules on warranties, and make it just as expensive to Do It Yourself.

In fact, to get a replacement Users Manual Audi cost $50 – $80. To get a service manual – $150. To find a diagram on the internet of the drive train, the engine and just your basic diagram of what part is what and where it is located is next to impossible unless you pay for it. The cost is almost equal to having a Certified Audi Technician plug in his Engine Analysis machine. This is what is known as – GOTCHA!

Recently, during a drive home the other night from an event, the Check Engine light started flashing, and the engine starting spitting and sputtering and the car started to shake. It felt like a flat tire or a case of the  DT’s  as a result of putting lower than recommend Octane gas in the tank.

I shut off the radio, rolled down the window and then scanned all the gauges on the dash.  Gauges  … No help!   My previous car experience indicated the porblem as the engine misfiring. And some exhaust fumes smelled like a fuel mixture problem. (IE .. TO MUCH FUEL, NOT ENOUGH O2).

We made eventually made  it home. The next morning I went out to check some things out. Opening the hood I was confronted with the Non 1959 Chevy Impala Engine Compartment.

Profanity  flowed from my lips as I was again confronted with this:

2000 Audi A4 Engine Compartment
(Similar to Ours, but you get the Picture)

Although I could find the radiator, see the fan belt, the oil filter, and other simple things, there is no way I could put my hand in anywhere to check anything. And for the most part I knew what all the electronic sensors, vacuum system, fuel system, and just about everything else did, I did not know what they looked like or where they were.

Internet search for locations and definitions of parts and location of various systems resulted in little or no help. I did, however, find out that the fuel pump on this car is under the back seat! And I did find what looked like a vacuum check valve or a regulator that looked liked it was disintegrating , but had no way of being sure if that was the case or if it was supposed to be in that condition or for that matter just what the part was called. Furthermore, the problem we experienced has been boiled down to, by the various on-line experts as one of two oxygen sensor, one or more ignition coils (which all four are suggested to be changed at once), a vacuole check valve, a vacuity sensor, spark plugs being fouled, Catalytic converter failure, broken or torn vacuum hoses, electrical short, water in fuel, and the very least but not last (get this) the Gas Cap being loose.

So what’s my point! Well, other to bitch, complain, whine and moan, my point is, that when a company can sell things that are in demand, and sell a lot they make money. When they improve their products reliability and Life Expectancy and provide a warranty that guarantees its performance for longer and longer periods of times thus decreasing their ability to sell the same amount of products each year, you can expect more company proprietary technology, more restrictions on maintaining the validity of a warranty, and a very high (over time) monetary price for routine service and repairs over the life time of a product.

Just as I was able to reach all areas of the Engine of my 1959 Impala, and now cannot reach or accurately identify anything with ease in the engine compartment of the Audi, the cost to maintain technological advanced goods today has equally become totally out of reach!

This entry was posted in Consumer Interest, Opinons on Stuff. Bookmark the permalink.